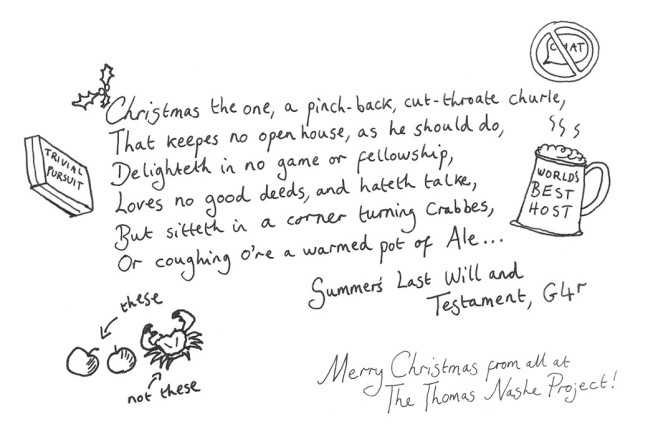 Christmas is coming, the goose is getting fat, people on Twitter are doing festive display names and no-one can find the end of the sellotape. On the University of Sussex campus, the students that thronged the corridors for essay meetings last week have scattered. Lights glint amongst the branches of the Christmas tree in Library Square, the cafe is serving festive peppermint hot chocolates with enough sugar in them to stun a horse, and a researcher just announced to her empty shared office that ‘IT IS EMMYLOU HARRIS CHRISTMAS ALBUM TIME’ because, well, it is Emmylou Harris Christmas album time. It is difficult to be very Scrooge-like about Christmas when you work in an institution of higher education, at least until the marking comes in.

Thomas Nashe might, I think, have approved, at least of the sugary hot chocolate – or, perhaps, of the snacks brought in by tired lecturers for their tired students. Although he lived (of course) in a pre-chocolate, pre-Christmas-tree, pre-Emmylou-Harris world, he had (as Nashe tended to do) strong opinions on how one should celebrate Christmas, and particularly on generosity during the festive season.

‘Christmas’ appears as a character in Nashe’s only surviving sole-authored dramatic work, Summer’s Last Will and Testament (first published in 1600, but probably written and performed while Nashe was staying with Archbishop Whitgift at his palace in Croydon, in the autumn of 1592). You can watch a full recording of the play, performed by Edward’s Boys in the the Great Hall of the Old Palace School in Croydon (its probable original performance space) on our project website: Christmas makes his entrance at around 1:44:00.

Christmas is one of Winter’s sons, along with Back-winter; the first we learn of them both is that they are bad ’uns. Summer is coming to the end of his reign, and there are two challengers for his crown: his retainers Autumn and Winter. Possessed of, well, basic understanding regarding the seasons, the audience know that Winter’s attempt to jump the line of succession will fail, but the conflict between the two dominates the latter part of the play. Winter makes a spirited (and very lengthy) complaint about Autumn’s fitness to rule, arguing that ‘A weather-beaten banckrout asse it is, / That scatters and consumeth all he hath’ (F4v). According to Winter, Autumn and Spring ‘are schollers favourites’, which is enough to damn them: ‘What schollers are, what thriftles kind of men, / Your selfe be judge, and judge of him by them’ (F4v; this particular scholar is too busy consuming Quality Street to confirm or deny this charge).

Autumn does not take this criticism lying down. After a swift condemnation of Winter’s cruelty, he launches a stinging attack upon his posterity. Winter’s sons are ‘worse than himselfe’, avatars of parsimony and malice. Christmas, in Autumn’s words, is Scrooge before Scrooge: he is the antitype of festive hospitality. He ‘keepes no open house, as he should do’ at this cold and celebratory time of the year; instead, he roasts crab-apples in a corner, refusing to be sociable (G4r).

It’s not long before we learn the truth of Autumn’s report. Unlike Summer’s other servants, Christmas enters without any musical accompaniment, to the aging king’s consternation. ‘A merry Carroll would have grac’t thee well,’ Summer chides, ‘Thy ancestors have us’d it heretofore’. Summer is not dealing, however, with a traditional Christmas of festivity and generosity, but rather with a new, sharp-tongued Christmas with an eye to the bottom line. Against Summer’s assertion that ‘Christmas is god of hospitality’, Christmas counters that times have changed: ‘So will he never be of good husbandry. I may say to you, there is many an old god, that is now growne out of fashion. So is the god of hospitality’. With self-serving piety, he details how celebrations will run this year. He will no longer feed the poor, because ‘Gluttony is a sinne’, and meanwhile, a large dinner ‘would but stretch out the guts wider than they should be, & so make famine a bigger den in their bellies, than he had before’ (H2r). He will not keep a rich table, because ‘Feasts are but puffing up of the flesh, the purveyers for diseases, travell, cost, time ill spent’. He allows for one exception: if all his sheep die of disease, the poor may eat them in his courtyard, but they have to bring their own bread (H3r).

This stinginess horrifies Summer, who calls Christmas ‘a snudge’ and sternly informs him that ‘It is the honor of Nobility, / To keepe high dayes and solemne festivals’. By breaking ancient bonds of hospitality, Christmas not only deals cruelly with those who rely on him, but fails to secure a happy future for himself: ‘Amend thy maners, breathe thy rusty gold: / Bounty will win thee love, when thou art old’ (H3v).

Nashe’s treatment of Christmas in Summer’s Last Will and Testament belongs to a thread that runs through his work: the notion that traditional ideas of hospitality and generosity are being displaced by self-interest, that puritanical religious ideas are being used to legitimise this, and that this miserliness destroys the bonds of fellowship on which society relies. This is perhaps most strikingly expressed in Pierce Penilesse (1592), in which the title character, having failed to secure just reward from any earthly patrons for his literary labours, goes in search of patronage from the devil instead. Pierce’s address to the devil takes the form of a wide-ranging, allegorical catalogue of the sins of the age, chief amongst them Greedinesse and his wife Dame Nigardize (parsimony). Greedinesse stalks around his chambers, ‘prepared to devoure all that enter’, while Nigardize ‘[barrels] up the droppings of hir nose’ to save on oil (B1r). Their kitchen and buttery are so small and bare, that the very rats and mice of the house are forced to make a meal of Greedinesse’s greasy codpiece for want of actual food (B1v). No wonder, then, that ‘Famine, Lent, and dessolation’ sit outside their doors, ‘as a Chorus in the Tragedy of Hospitality, to tell hunger and povertie thers no reliefe for them there’ (B1r).

‘Pierce Penilesse’ was closely identified with Nashe, and the sense one gets from his works (and from Gabriel Harvey’s attacks on him) is of a young man frequently down on his luck, chronically underrewarded for his wit. Throughout his writings, the generosity of a few (various patrons, for a time; the town of Great Yarmouth) stand in contrast to the failure of a wide, cold world to offer hospitality to poor petitioners, poor scholars, poor writers with disgrace at their heels. Katherine Duncan-Jones details Nashe’s probable imprisonment in 1593 following the publication of Christs Teares Over Jerusalem, from which he was freed through the intervention of his patron George Carey. Her description of the disgraced Nashe joining Carey and his wife Elizabeth in the Isle of Wight for ‘what was probably the best Christmas of his life’ (Duncan-Jones 1998: 169) cuts deep: I’ve not often found myself wondering whether writers I work on had happy Christmases, but I find myself wondering it about Nashe.

Happy holidays, Nashe fans. Be kind to each other, and to any wandering snarky pamphleteers who cross your paths: and may your Christmas be as jolly as a party at the Careys’ gaff, delighting in game and fellowship, loving good deeds, and loving talk.